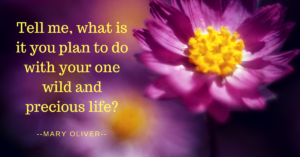 R was stuck in a job that didn’t challenge her, with toxic office dynamics that left her depressed.  Her mother’s roof was leaking, and neither she nor her Mom had the resources to get it fixed.

Then she was diagnosed with a recurrence.

Part of her felt like her future had been stolen.  But another part of her just couldn’t give up.

We had a conversation.  “What if I survive,” she asked herself, “and I look back and see I didn’t do the things I wanted to do?”

She wanted to take back the reins of her life, but didn’t have the money to get started with coaching. Nevertheless, she declared she would start working with me within three months.  She was going to watch her spending, and set aside money she would have spent on anything not completely necessary.  She promised to check in with me every two weeks.

Although it took four months instead of three, she kept that promise.  By the fall, R had the money in hand and was ready to go.  Before we even started working together, she felt the peace and strength that comes from complete alignment: doing exactly what you say you want to do.  “I got so much from this process alone,” she told me.

As we worked together, R discovered outdated thought patterns that were holding her in fear, keeping her from believing she could have the future she wanted.  She replaced them with new beliefs, and promising professional connections and job prospects began to show up.  Abundance began to flow, and by the time we’d worked together for three months, her Mom was living under a brand new roof.

“Sometimes I wish we talked more about cancer,” she told me, “but I guess I’m seeing that cancer is a small part of me.”

Yes.  You are way, way bigger than any cancer you have, or had.

When R remembered how much bigger she was than cancer, she found the space to dream again.

Believing in you unconditionally,