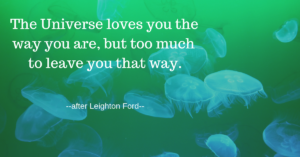 My client B has told me for a long time that she’s wanted to publish something she’s written.  Sometimes she talks about writing a children’s book, other times about sharing parts of her cancer experience.

At times she’s picked up her notebook and begun to write, but she’s always given up after a short time.  It was hard to understand.  The snippets of her writing that I’d seen were moving and creative.

Recently one of her doctors asked B what was on her bucket list. Publishing her work came up right near the top.  So she tried again. And this time she wrote a series of poems about her cancer experience.

Thinking this was an exciting development for her, I asked her how it felt to have written the poems.

“I have mixed feelings about it,” she told me.

I asked her to tell me more. “I feel vulnerable,” she said.

That would be understandable.  Cancer probably forced you to face your vulnerability too.  Your body may have been brought to the brink of what it could tolerate.  Your spirit may have been shaken: what used to make life seem safe and predictable was pulled out from under you.  And emotionally?  By now you know that roller coaster well 🙂

But that vulnerability, tender as it is, is common to nearly all cancer patients.  I sensed we weren’t at the bottom of what was going on for B.  I probed further.

“What I wrote was honest, but it wasn’t nice,” she said.

We delved deeper.  B revealed that she’s the daughter of a pastor.  Her family was always in the public eye, and she was trained to monitor her words and behavior carefully.  Saying things that weren’t nice was simply not allowed. “I’m known for being kind,” she said.

Yet when she allowed herself to express all of her thoughts, even the “unkind” ones, her creativity flowed.

She recognized how in the past she’d constrained her writing by squelching “unacceptable” thoughts.  She noticed the relief that came from giving herself permission to authentically express the full spectrum of her experience.

And she came to see that she was no less kind a person for having honestly expressed the turbulence and difficulty that comes with cancer.  She was especially being kinder to herself by honoring the full breadth of her experience.

B’s on a roll now. She brings her notebook to her chemo sessions and writes to her heart’s content.  “I look forward to that time,” she said.

We’ll see when she’s ready to publish.  When she does, we’ll get to experience the full magnificence of B, not just a censored sliver.

What part of you is aching to find its voice, my friend?

Seeing the magnificence in you,

It’s my joy to offer you a personal, complimentary Clarity Conversation of up to 60 minutes.  You’ll come away clearer about what you’ve been struggling with, what you’d love your life to look like, and the best next steps to get you there.