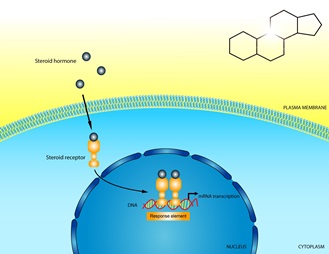 I’ve been told to avoid soy at all costs since breast cancer treatment, because it could encourage the return of my cancer.  What’s the problem with soy?  Is it really a cause of cancer?

To answer your question, let’s first look at how estrogen works in your body. Then we’ll look at whether eating soy is a problem.

Estrogen is produced by your ovaries, adrenal glands and fat tissue.  It can also be produced by converting testosterone to estrogen, especially in men and in post-menopausal women.

Estrogen, a steroid hormone, is naturally produced in 3 forms: estrone, estradiol and estriol.

(At this point ask yourself: why would your body naturally produce three forms of estrogen, rather than just one?)

Once produced, estrogen is released to circulate in your blood, most often bound to a carrier protein called sex-hormone binding globulin (SHBG). It’s released by SHBG at various tissues, where it floats easily through cell membranes and binds to receptors specially shaped to accommodate estrogen molecules.  Bound to its receptor, estrogen can enter the nucleus of the cell, where it affects the behavior of genes in hundreds of ways.

In your body’s native state, estrogen’s influences on cell behavior are constructive.  (Your body wouldn’t produce estrogen if it wasn’t beneficial to your wellbeing.)  Estrogen triggers maturation of the female reproductive organs and regulates their functioning throughout life.  It also strengthens your bones, keeps your skin and membranes moist and pliable and exerts a healthful influence on your cardiovascular system.

So when does estrogen become the “bad guy”?

Excess binding of estradiol – the most potent form of estrogen – is a key mechanism behind the formation of estrogen-positive breast cancers, uterine and ovarian cancers (and even some prostate and lung cancers).  That’s why current drug therapies aimed at preventing recurrence of these cancers aim to interrupt this activity in one of two ways:

But what causes excessive estrogen activity in the first place?  Some common reasons uncovered in recent years include:

Does that mean soy is dangerous for cancer survivors?  Come back next week to find out.