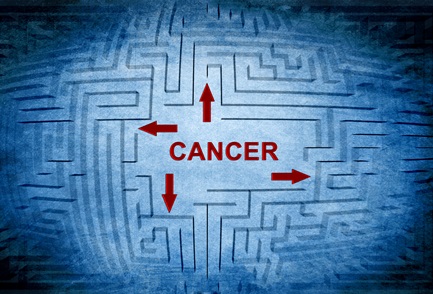 I hope you’ve been tuning in to “Cancer: Emperor of All Maladies” on PBS this week. It’s a beautiful interweaving of human stories with the history of successes and deep disappointments in the search for cancer cures.

Last night I was deeply struck by segments tracing the development of “gold standard treatments” for cancer. At the beginning of the 20th century, one surgeon, believing that breast cancer began at a central point and spread outwards from there, developed progressively radical surgeries to treat it. The “radical mastectomy”, which removed large swaths of pectoral muscles in addition to the full breast, became the standard of breast cancer treatment for seven decades.

Over a third of women relapsed after these surgeries, and were subjected to further surgery. You can imagine the toll on quality of life…and rates of survival weren’t improving. Cutting more didn’t mean curing more.

As President Nixon’s “war on cancer” spent billions of dollars on research from 1971 through the mid-1980s without producing new treatments that improved survival, one doctor dared to question the standard. New science was revealing that cancer doesn’t grow in an orderly pattern out from a central point; it could show up in distant organs in an unpredictable manner.

With this new understanding, surgeon Bernard Fisher, MD, proposed that breast cancer surgeries be scaled back to remove only the known tumor load. Cancer beyond the tumor site would be better addressed by systemic treatment, such as chemotherapy. He developed the lumpectomy procedure, which was followed in short order by the sentinel node procedure: removing only the lymph node most likely to indicate spread of cancer, rather than the massive node removals that accompanied radical mastectomies.

For these revolutionary insights, Fisher immediately became an outcast in the medical community. His grant requests for clinical trials were categorically denied on the grounds that he was endangering patients’ lives.

But word leaked out that the new procedure could spare women the devastating side effects of radical mastectomy. Women across the country rose up, protesting and lobbying forcefully and volunteering to participate in lumpectomy trials.

In the face of this public outcry, funding for Fisher’s trials was eventually granted. Lo and behold, there was no worsening of survival rates with lumpectomy (and more conservative mastectomy) surgeries, and survivors’ quality of life vastly improved. One brave doctor who challenged the accepted understanding of how cancer works, and many women willing to put their bodies on the line in hope of a better life, changed the gold standard of cancer treatment.

Unfortunately, we go on to learn that this victory didn’t keep the medical establishment from repeating such blunders, backing aggressive (and profitable) treatments which resulted in no survival advantage and horrific side effects, while being painfully slow to fund trials of promising therapies based on new understandings of what cancer is. That’s why I’m grateful for this film’s reminder of Margaret Mead’s timeless words:

“Never doubt that a small group of thoughtful, committed citizens can change the world; indeed, it’s the only thing that ever has.”

Post your thoughts below: what was your most powerful “take-away” from this series? What questions does it raise for you? Would you be willing to put your body on the line for cancer research?